Inserting Ideas into the Public Mind 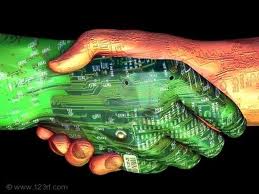 I’m enrolled in a course about Strategic Communication right now and with the explosion of the facebook and twitter revolutions across the Middle East it really puts a new face on the whole concept.  It really got me thinking about how interconnected we all are now all over the globe and how powerful the new social media really is.  I’ve read opinion that it is the most innovative development since the industrial revolution.  I’m not sure we understand all the ramifications yet.

How many of you have read Ender’s Game? (If you haven’t you really should) It was originally penned in 1977 by Orson Scott Card and there is a segment in there about Ender’s older siblings taking on personas on the “nets” to shape public opinion.  WOW is all I can say.
There was no true internet back then, not the way we know it now.  The first version of Windows didn’t come out until 1985.  The World Wide Web didn’t exist before 1990.  There were only USENET groups and electronic bulletin boards from the mid 80s until the early 90s.   Card was visionary with some of these ideas.
I see that now is the time when something like Locke and Demosthenes could actually be utilized with real effect -- Agents with an agenda to shape public opinion.  Governments across the planet are fighting a war of ideas and information is a commodity.  The ability to shape global opinions through social media would be a powerful weapon if it could actually be harnessed somehow.  I think there is a kernel for a great story here.  But reality could be even more scary.  A determined group of people with money and some real savvy could build a network of social media personas to nudge opinions.  Collectively they could have a real impact on global viewpoints and if the recent events in Tunisia, Egypt and Libya are any indication they could topple governments.  Food for thought.
Clear Ether!