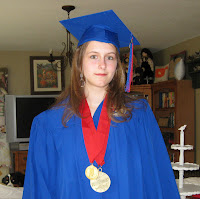 My daughter graduated this past weekend and she had a speaking role.  We didn't get a preview of her speech and were blown away by not only the content of her speech but the professional delivery.  I've had a couple of WOW moments with her and this was one of them.  I just wanted to share the speech here:

Why Growing up is Bad for Your Health


So, upon being told that I was to be Salutatorian, I decided it would be a good idea to look up what a Salutatorian does. It’s not always a good sign when you can barely say your own title without messing it up. I mean, that has a coolness factor to it and everything, but not very telling of what I’m supposed to do besides make a fool of myself up here.

So, I did what every good student does: I went to Wikipedia.
First off, Wikipedia told me that my first job is to congratulate you. So…congratulations! For a reward, you get to sit around in a sweaty blue robe and listen to me talk. Yes, you are very excited about this.
But seriously, congratulations. I know this has been a rough journey, but you guys…we’re finally here! We made it! We’re grown-ups now!
Did you know that salutatorians really like to talk about growing up? Like, way a lot. It’s a huge deal, apparently. The “thing to do”. So, I’ve been racking my brain, trying to figure out my two cents on growing up.
But, everyone…I must admit, I’ve been thinking about it, and on the topic of growing up, I really have only one big thing to say:
I’m really sorry.
Seriously. This growing up thing…it’s kinda…not that great.
Now, growing up does involve some grand aspects—many of which you have already experienced, maybe without realizing it at first. Greater freedom of choice, more widespread respect for you and your opinions, little to no curfew. You’ve, seemingly at random, become a person who no longer receives crayons when you go to a restaurant.
Honestly, I don’t know whether to be happy or sad about that.
But, to make up for it, you can all drive, vote, hang out with who you want, and become whoever you want to be. It’s a good era to be a grown up.
Now, those things aren’t crayons, or Saturday morning cartoons, or ball pits, or big inflatable jumping castles, but, you know. I mean, Lord knows that when I see an inflatable jumping castle, there is no force in the world that can stop me from jumping in it except a sign that says “Only kids 120 pounds and under.”
So, no adults allowed. And…somehow, that means me.
That’s weird.
Whenever I hear the word adult, I think of a man with a black tie sitting in an office cubicle doing whatever it is people in those large office spaces do—most likely “matters of consequence.” Now, according to Antoine De Saint-Exupery, an obviously French author with a last name I cannot pronounce, “matters of consequence” are supposedly important things that we, especially when we were kids, wouldn’t understand. “Sensible” things. Things like stocks, salaries, meetings, politics, neckties…minivans…fiscal responsibility, counting carbs…bills…
…ick. I’m going to stop before I put myself to sleep.
I mean, what are matters of consequence, anyway? What matters in this world? Is that ridiculously boring list of things really what makes the world go round?
Hmm.
My littlest brother Carter, a 9-year-old boy who I love to talk about and who probably feels even more trapped listening to me than all of you do, has very lofty career goals. Currently, they include being a pilot-engineer-astronomer-builder.
Yeah.
“I don’t think I’ll have a lot of time to do stuff,” he once admitted. No kidding.
But one day, Carter told my mom that he was afraid of becoming an adult. When my mom asked why, he very seriously declared to her, “What am I going to do about insurance?”
Oh, indeed. That blasted insurance.
But this is more astute of an observation than you may know. Carter is 9, but he isn’t blind. He sees what adults deal with. I don’t like the assumption that kids don’t understand everything that is going on; obviously, they understand a lot more than we know.
In particular…my little pilot-engineer-astronomer builder understands what he likes. And he knows that his dream is very important…a matter of consequence. But he will one day be an adult who will be told that there are no such things as pilot-engineer-astronomer-builders.
Perhaps being a pilot-engineer-astronomer builder doesn’t seem sensible. But neither does the vast majority of things adults are forced to do each day.
What is sensibility, in the end? Is it settling for “what you can get”? Or…is it finding clarity in something you are passionate about…even if adults have, time and time again, told you that aspiring to be an actress, a chef, a filmmaker, an artist, a star…is unrealistic? What’s unrealistic? To me, living in a world without our pilot-engineer-astronomer-builders is unrealistic. I know you all have aspirations. It is why you are sitting here at all.
Growing up is a series of losses. Of losing teeth. Of losing toys. Of losing sight of where to go. What to do. And that is not so great.
But it doesn’t have to be that way. Especially not for us.
We stand here, at the edge of some great doorway. Before us is all we have ever dreamed of doing, of accomplishing, of being. Behind us stands everything we’ve ever known. It is a beautiful place to dream, here, in our little doorway. And dreams are not something we should let go of or forget. We will understand that there is more to this world than what some people may say. That there is more than some people will want to give us.
“No grown-up will ever understand that this is a matter of so much importance!” So says one lost pilot of his Little Prince. Of looking at the sky and seeing all the beautiful possibilities.
But we do. Don’t we? So, fellow graduates of 2011, I have one final duty as your Salutatorian. It is to welcome you. Congratulate you. This is my Salutatory Address to you…my Address of Welcome. I say to you, you athletes, you future mathematicians and physicists, you entrepreneurs, you dancers, you artists of all creeds, you dentists and doctors and chefs, you writers and thinkers, you who have suffered with me, be it in Red and Blue with the evil Macs, or in English dying because we have to write a paper, or in Math, angry because nothing in math ever makes sense, or simply along the way, you Wildkats all…welcome to adulthood.