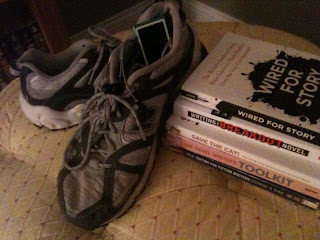 Chuck Wendig posted yesterday about his effort to start running, and it got me thinking about my own love/hate relationship with running. When I was a young man I loved to run and had speed, but I suffered from the same ailment as Chuck, Osgood Schlatter's disease.  I had to quit playing soccer and football, which was a real bummer for me, as my life was centered on sports back then. My focus switched to academics, and it proved to be auspicious. If that hadn't happened I likely wouldn't have gone to the Air Force Academy or became a pilot. Sports wouldn't have done that for me.

I did, however, start running again a few years after the onset of the disease, for therapy, once the pain stopped crippling me every time I ran. I had some bad days, where I could barely walk the following day, but eventually, I was able to run several miles without pain or any after effects. By the time I was a senior in high school I was running on the cross country team. I wasn't fast, like I was before the Osgood Schlatter's disease, but I was able to compete.

Fast forward through college and running fell out of my routine, becoming a time waster and an annoyance. I was too busy playing video games. If I gained a few pounds, enough to notice, I would run a few days in a row and loose the weight. I weighed all of 142 pounds back then. I abused my body with lack of sleep, smoking at least a pack a day, and drinking moderate to heavy amounts of alcohol through my 20s. At 27, I quit smoking (first kid,) and gained 20 pounds almost overnight. I was not running, or doing hardly any regular exercise, but I was still in the active Air Force and had to maintain a minimum level of fitness. So I would ramp it up a few weeks prior to testing. Since then, I think I put on a little more than a pound a year until I hit 195 (I'm 5' 8"), and inevitably failed a fitness test.

READ THE REST OF THE STORY»
No comments: