J. L. Gribble has created a captivating alternate reality in her debut novel, full of magic and vampires and were-creatures. The story centers around a centuries old female vampire named Victory and her adopted family, and the city-state she's cultivated as a safe zone between the British and Romans empires. 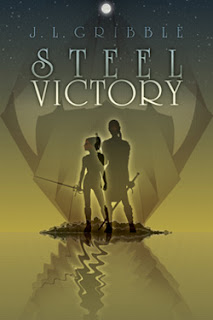 Victory has tried to step back in her control of the city politics, but as often happens, subversive elements creep in and try to undermine all she has accomplished. A new Roman Emperor also threatens to destroy the peace that has been established by treaty for decades.

But her family is not one to be trifled with. They all have military training and varying degrees of experience in the arts of war. A mercenary guild helps protect the city as well, with ties that go back to the birth of the city. But their little hamlet is no match for an entire legion from either the Brits or the Romans, so they must rely on savvy politics to keep their status as a free-state.

The characters are all singular, well-developed, and interesting. She uses strong female characters as the main points of view, while not a new thing, it does add flavor to the historical fantasy trope, especially Victory as a matriarch of the city-state and the anchor of the story.

Mrs. Gribble's prose is excellent, a very well-done novel from a first-time author. The story is tight and moves quickly. It drew me right in. I would definitely qualify this novel as a page-turner. She keeps cranking up the tension, and just when you think things couldn't get any worse, she takes up another notch.

The timeframe this story takes place in is hard to pin down. The alternate history of Romans and Greeks still playing a large part on the world scene would imply an older venue, but it's post-apocalyptic, taking place long after a nuclear war that has devastated much of the land. Certain types of technology have been rendered useless by Elven magic but there is a history of gun making that could be taken out of our current science. The history of this world intrigues me and I hope we find out more about it in the other books in this series. She currently has this planned as a trilogy with the next book set to release sometime in 2016.

If you like vampires or urban fantasy this should be in your wheelhouse. Highly recommended.
No comments: