The Writer's Lexicon is Updated 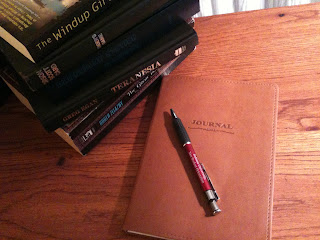 I’m actively compiling this list to benefit writers of varying levels of immersion in the waters of authordom, to help us look less stupid or simply to help you navigate the world of writing a little more confidently. I am taking suggestions to add to this list, it's not complete by any stretch.  I am particularly interested in ‘writer-culture’ words. Or, perhaps you disagree with my definition. I’d like to hear about that as well.

Alien Space Bats - The term was originally used as a sarcastic attack on poorly written alternate histories due to lack of plausibility to create improbably plot divergences. Also refers to the use of Deus ex Machina in the form of Ancient Aliens.

Backronym - Same as an acronym but the word came first and the meaning behind the letters followed after.

Big Dumb Object (BDO) - The science fiction term refers to any mysterious object (usually of extraterrestrial or unknown origin and immense power) in a story which generates an intense sense of wonder just by being there. For example the Monoliths in 2001 A Space Odyssey, or The Void Ship in Doctor Who.

Brenda Starr dialogue - Long sections of talk with no physical background or description of the characters. Such dialogue, detached from the story’s setting, tends to echo hollowly, as if suspended in mid-air. Named for the American comic-strip in which dialogue balloons were often seen emerging from the Manhattan skyline.

“Burly Detective” Syndrome - This useful term is taken from SF’s cousin-genre, the detective-pulp. The hack writers of the Mike Shayne series showed an odd reluctance to use Shayne’s proper name, preferring such euphemisms as “the burly detective” or “the red-headed sleuth.” This syndrome arises from a wrong-headed conviction that the same word should not be used twice in close succession. This is only true of particularly strong and visible words, such as “vertiginous.” Better to re-use a simple tag or phrase than to contrive cumbersome methods of avoiding it.

Brand Name Fever - Use of brand name alone, without accompanying visual detail, to create false verisimilitude. You can stock a future with Hondas and Sonys and IBM’s and still have no idea with it looks like.

“Call a Rabbit a Smeerp“ - A cheap technique for false exoticism, in which common elements of the real world are re-named for a fantastic milieu without any real alteration in their basic nature or behavior. “Smeerps” are especially common in fantasy worlds, where people often ride exotic steeds that look and act just like horses. (Attributed to James Blish.)

Chekhov's gun -  "One must not put a loaded rifle on the stage if no one is thinking of firing it." – Anton Chekhov, letter to Aleksandr Semenovich Lazarev (pseudonym of A. S. Gruzinsky), 1 November 1889. It is a metaphor for a plot device or foreshadowing, which if shown or discussed should be used later.

Deus Ex Machina - Latin for: God from the machine.
This device goes all the way back to ancient Greece, where a problem in the story is solved by the sudden invention of something that saves the day.  It’s often criticized as lacking imagination on the part of the author, as it often violates the internal logic of a story.

Gingerbread - Useless ornament in prose, such as fancy sesquipedalian Latinate words where short clear English ones will do. Novice authors sometimes use “gingerbread” in the hope of disguising faults and conveying an air of refinement. (Attr. Damon Knight)

MacGuffin - "[We] have a name in the studio, and we call it the 'MacGuffin'. It is the mechanical element that usually crops up in any story. In crook stories it is almost always the necklace and in spy stories it is most always the papers." -- Alfred Hitchcock
A plot device that provides the initial motivation for a character, and it may or may not end up coming back into the story at the end.

Not Simultaneous - The mis-use of the present participle is a common structural sentence-fault for beginning writers. “Putting his key in the door, he leapt up the stairs and got his revolver out of the bureau.” Alas, our hero couldn’t do this even if his arms were forty feet long. This fault shades into “Ing Disease,” the tendency to pepper sentences with words ending in “-ing,” a grammatical construction which tends to confuse the proper sequence of events. (Attr. Damon Knight)

Pathetic Fallacy - A literary term for the attributing of human emotion and conduct to all aspects within nature. It is a kind of personification that is found in poetic writing when, for example, clouds seem sullen, when leaves dance, when dogs laugh, or when rocks seem indifferent.

Quibble - A plot device where the exact verbal directions are followed to the letter but avoid its intended meaning, such as: A deal with the Devil, or Genie Wishes, or in The Lord of the Rings, Glorfindel's prophecy states that "not by the hand of man will the Witch-king of Angmar fall." The Witch-king is slain by Éowyn, a woman.

Pushbutton Words - Words used to evoke a cheap emotional response without engaging the intellect or the critical faculties. Commonly found in story titles, they include such bits of bogus lyricism as “star,” “dance,” “dream,” “song,” “tears” and “poet,” clichés calculated to render the SF audience misty-eyed and tender-hearted.

Red herring - A false clue that leads the characters toward an inaccurate conclusion within the plot of a story, considered to be the opposite of Chekhov’s Gun.
The Chewbacca Defense is starting to come into the lexicon as a famous Red Herring It refers to a South Park episode and refers to using something so patently absurd that it makes no sense and creates confusion.

Red Shirt - Expendable, refers to the crewmen of the TV Series Star Trek who were often killed during a mission.

Retroactive continuity or Retcon - An alteration of facts about a story that already been published in order to accommodate a sequel or prequel, or simply to correct errors in the original chronology of events. Commonly used in Comic Books and Pulp Fiction.

Retronym - A neologism that gives a new name to an old object because of some development that requires clarification, such as Acoustic Guitar after the Electric Guitar was developed.

“Said” Bookism - An artificial verb used to avoid the word “said.” “Said” is one of the few invisible words in the English language and is almost impossible to overuse. It is much less distracting than “he retorted,” “she inquired,” “he ejaculated,” and other oddities. The term “said-book” comes from certain pamphlets, containing hundreds of purple-prose synonyms for the word “said,” which were sold to aspiring authors from tiny ads in American magazines of the pre-WWII era.

Tautology - Needless repeating of a word or idea, such as 'final result'

The Tommy Westphall Universe Hypothesis - A character from television series St Elsewhere who, in the last episode was seen waking up and the entire series was in his imagination. Refers to using the “it was all a dream” idea to end a story.

Back Matter - Back pages of a book that have appendixes, indexes and endnotes

Cliché - An expression or idea that is so overused that the meaning is weakened, more commonly used today to mean stereotypical or predictable

Clip - A sample of work

Ellipses -  … there are several methods to show this in manuscript, check with your editor or agent on how to show these.

Em Dash - a style of showing a break in thought. Style manuals show 2 and 2 em dashes and their uses.

Front Matter - Printed material at the start of a book including title page, table of contents and dedications

Front Piece - A page in the front matter facing the title page, usually containing an illustration and often on different card stock

Galley - The first printed version (proof) of a document

H/H - Hero and Heroine (A couple in a romance novel)

HEA - Happily ever after (used in the romance genre)

Imprint - A branding name used by a publisher for books they release, one publisher may have several

ISBN - Unique number assigned to each book by a publisher, now a 13 digit number, not necessarily required by self-publication

Lead or Lede - The first couple of lines of a story

Ligature - Special characters formed by combining two or more letters, such as æ

Logline - A brief description of a piece, usually a teaser

Meme - Pronounced ‘meem’ - an idea, belief or system of beliefs that spreads among a culture

Neologism - A new word or expression

On Publication - Payment received only when the MS is published

On Spec - A submission accepted without obligation to publish it

Parenthetical - Using these (), still acceptable but falling out of use in fiction

Pitch - A short description of a piece

POV - Point of view - the perspective of the story, 1st person

Preface - Introductory statement in the front matter written by the AUTHOR

Proof - A trial sheet printed to be checked and corrected; a galley is the first proof

Revising - Making structural or content changes to a draft

Show Don't Tell - Writing in a manner that allows the reader to experience the story through the description of actions, thought, senses and feelings rather than through exposition or summary

Synopsis - A longer description of a piece, usually including all the secrets and how the story ends, these can be different lengths for different purposes, usually in the range of 2 pages for agent submission

Trim or Boil - To reduce the length of a story

WIP - Work in progress, usually the current project being written

FBP - Floating Body Parts, using description in a way that gives action to the character/person, not his/her independent body parts, like 'Her eyes roamed the room' or giving people smiles

nc or ? - Not clear or confusing

RUE - Resist the urge to explain

Compound Sentence - A sentence containing two or more clauses separated by 'and', 'but' or 'or'

Gerund - A form of verb acting as a noun and ending in 'ing', like 'acting' (present participle)

Imperative - A word used as a command; Go

Independent Clause - A group of words containing a subject, verb, and if necessary, an object, that can stand alone as a sentence

Indirect Object - The object preceding the direct object that tells to whom or for whom the verb is acting, such as 'me' in 'He sold me'

Interrogative Pronoun - A pronoun used to ask a question, What, Which, Where, Whom, Whose, etc

Intransitive Verb - A verb that doesn't need a direct object, such as 'she fainted'

Predicate - Part of a sentence, excluding the subject, that tells about the subject

Simile - Comparing two similar things using 'like' or 'as'

Subordinating Conjunction - A conjunction such as 'although, because, since, while' that precedes a subordinate clause

Transitive Verb - A verb that requires a direct object, 'he threw the ball'

Deck - The sentence or two under the title of a book

Folio - The page number on a page; blind folio has no page number but counts in the page count

Kerning - Adjusting the space between characters

Slug Line - ALL CAPS - location and time of day


There is a link to this on the top line that I will keep updated with the most current version.