Many people were expecting an opening closer to $45 -$55 million domestically, and it fell far short of that at $36 million. Did the length scare people off? It has received overwhelmingly good reviews from critics and movie reviewers and fans alike. I don’t get it.

Go see this movie before it leaves the theater! You will thank me later. It is maybe the best sequel ever made. The cinematography alone will make the visit worthwhile. Roger Deakins will finally win the Oscar for this film.

It is long, longer than most any movie made these days and the editing is a throwback to another era, when we could actual spend a little time with a scene or a character to absorb what is going on. And with this film I wanted to spend that time. It isn’t edited like a James Bond movie, and I appreciated that. The movie is not pure homage, either. It is subtle. There is complexity to the characters and Gosling’s low-key approach make his emotional outbursts all the more powerful. It didn’t feel too long when I was watching it and I could have gone another hour easily. Director Denis Villeneuve gave each scene room to breathe and there is so much obvious care to stay true to the original vision of Ridley Scott. He takes all the things that worked and made the original so iconic and improved upon them. The city scape is dark and eerie and amazing. Meticulous details, like PAN AM, RCA, Cuisinart, and ATARI still being viable companies in this fictional alternate universe, and references to the Soviet Union with product advertisements, like Soviet Happy, which seems like an oxymoron, but fits perfectly with the ambience of city life in San Angeles. The technology is cool and convincing, and just different enough, and yet real enough to be completely plausible.

Book Review - Into the Wilderness by Sara Donati 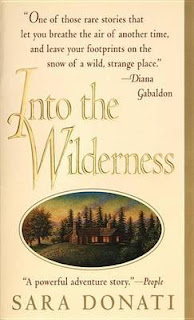 Into the Wilderness by Sara Donati
My rating: 5 of 5 stars

A brilliantly written masterpiece in every way! If you like historical fiction Into the Wilderness is a hallmark example of how to do it right. As a young man, the stories by James Fenimore Cooper captured my imagination, The Leatherstocking Tales: Deerslayer, Last of the Mohicans, The Pathfinder and more. They are set during the French and Indian War, in and around the New York frontier. The writing style can be a bit hard to get into since it is quite old, but the stories are excellent. Into the Wilderness starts a series of books by Sara Donati that follow the offspring of Hawkeye from the original stories and carries us through the decades following the war, through the War of 1812 up to the Battle of New Orleans. Donati has changed the surname of the family but the rest is true to the originals. However, the prose is light years beyond the originals.

This first installment sets the tone and introduces the characters. A well-educated young woman from England, Elizabeth Middleton, has been brought by her father to the small wilderness village on the western edge of the New York frontier, where Hawkeye lives with his extended family of Mohican Indians. His son, Nathanial Bonner is a prominent figure in the region, known for his hunting skill, and his wilderness prowess, which he inherited from his father. To call it a romance story would not be wrong, but it would short shrift the complexity and nuance of this story. It weaves unconventional love with the fate of the Mohawk. This book has everything you could ask for in a story: brilliant prose, colorful characters, exciting setting, intriguing plot, wild adventure, love, sex, betrayal and so much more. It touched me emotionally as I got invested in all the characters. All of them are complex and well-developed and each has their own voice and motives. It is a wonderful example of a character-driven story.

READ THE REST OF THE STORY»
2 comments: