Review of Altered Carbon on Netflix 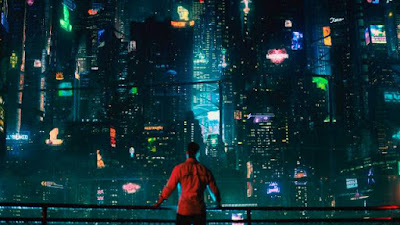 I just finished the new series on Netflix, Altered Carbon. Let me say right up front that I loved it!

It is 10 episodes packed full of action, intrigue and awesomeness. Think Blade Runner meets Kill Bill meets Star Trek The Next Generation. But you would have to cross that with something graphic, for both violence and sexual content. It is very R rated, and filled with violence of every sort, including torture, as well as a fair amount of nudity. The series is based on the 2002 novel by Richard Morgan, and the main plot follows the original story relatively closely for those that have read it. The book is really in a genre all its own as an adult SF thriller.

This show looks incredible and really feels like a possible dystopian future. The sets are just amazing. The tech is cool in the extreme. It is set several hundred years in the future, where humans can store their personality in a cortical stack, which basically sits on top of your spinal chord at the base of the brain, and people can have their selves sent all over the colonized worlds at light speed, or have backup stacks and bodies (sleeves), if you can afford it. The good stuff is only available to the very rich, and society has evolved into a caricature of our own in the have and have-nots.

The plot is a noir mystery at its heart, with the main character being the last remaining bad-ass ninja special ops operative from a time in the past that was much more violent. He has been in virtual prison for 250 years for being a rebel terrorist to the Protectorate. He is the last of the legendary Envoys, which were an underground splinter group of operatives specially trained by Quellcrist Falconer. They are a cross between Navy Seals and ninja warriors, that were also hardened in the virtual world, with an unmatched skillset.

READ THE REST OF THE STORY»
No comments: