I just finished Richard K. Morgan’s latest release, Thin Air. It is gritty SciFi at its finest. Morgan seems to have leveled up in his writing, over already highly regarded and award-winning previous work. Every sentence is crafted with care. It is a Master Class of immersive third person point of view writing. 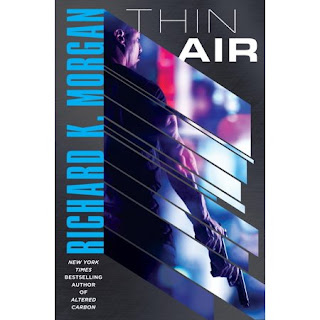 I listened to the audiobook version, which was read by Colin Mace, and for me, it was a perfect fit. Mace hit the ball out of the park and became the embodiment of Hakan Veil, the hi-tech ninja of the future and protagonist of what I hope is not a standalone novel. It is a new character and setting of sorts for Morgan. He alludes to his concept of the Mars colony and COLIN (Colony Initiative) in Thirteen, which I have started today. I just downloaded the audiobook.

This story had me riveted from the word go, and didn’t let go. It is the best science fiction I’ve read since Ancillary Justice, which won the Hugo. This work is certainly good enough to be in consideration, but it has very adult themes (read graphic sex.) Morgan has included this with intention and I hope it doesn’t take him out of the running.

There is so much to love about this novel. The characters are real and multifaceted. The description is immersive, but not overdone and the word choices are evocative and graphic, and fit perfectly with the landscape of Mars he has painted. Mars itself is a character all its own. It has a well-developed history and a depth that makes it feel authentic, albeit a true frontier and all that comes with that, 300ish years into a colony development that never quite materialized the way the original planners had envisioned. His simile and metaphor are based on these artifices of an old Martian colony and struck the perfect chord to bring the setting to life. The science parts of the fiction are the essence of cool and seemingly plausible, including the pseudoatmosphere of the lamina, a membrane of sorts that covers the dug out Gash, allowing for a localized breathable atmosphere. The prose is wonderful, especially considering that this is a hard-boiled genre fiction piece, great writing implanted within a ruthless noir fiction story.

Veil is a former Overrider. A last resort corporate security ninja, that is kept on ice in orbit, a sort of ‘break glass in case of emergency’ setup. He has been bred since childhood for this life, adding a backdrop that adds a little sympathy to a character who at times, seems to lack it entirely. He has the ability to stuff all of his humanity into a drawer and do what needs to be done, no matter how hard or how terrible it might be. “The ship must be saved at all costs.” However, something horrible happened on his watch involving important people that forced him out of that life and into one on Mars with no safety net. This is all back-story and is alluded to in snippets but never completely spelled out. There is a flashback scene of his childhood that is heart-wrenching and adds to the depth of his character, if not the empathy we might have for him. He is a hard man to like, but there are moments, glimpses of his wry humor and intelligence, and even warmth for those few that he feels real loyalty for that is enough for me to throw all-in with him. He’s not the world-weary protagonist with the heart of gold. His very nature drives him to violence, but he is smart enough to temper it all with a modicum of self-restraint . . . most of the time.

He has appetites and a real weakness for women that, if not a blind spot, is at least an extremely hazy area in his field of vision. His onboard AI even reminds him of these things over and over but he wants what he wants and does things his own way, damn the torpedoes. More often than not, though, Veil has an instinct to take the right course of action, even when I am wondering why he isn’t more interested in interrogating someone instead of killing them without a second thought. I came to trust his instincts, and figured he had seen enough of the slimy side of life that he knew what he could discard and what he needed to hold onto. He isn’t infallible, but has a knack for survival.

Morgan does a great job of taking an ultra-masculine killer, who is definitely self-absorbed, (who wouldn’t be if you were designed to spend months in hibernation or endless hours alone) and lends him a respect for women and the marginalized, giving them a dignity and power all their own, even if those powers may pale in the light of the deadly skills of the Overrider. All of the main characters have agency, whether they be a strip club dancer or a local cop or corporate thug.

The story is part western, part detective noir but is all parts violent and at times gory. It is generously gratuitive in both violence and explicit sex. The action rarely takes a breath, rocketing constantly forward and all over the settlement of the Gash, from its depths to its borderlands. It kept me guessing who the real bad guys were throughout the story and wondering who Veil could really trust.

The novel has a satisfying ending, that left me wanting more of Hakan Veil and more of the Martian colony that got interrupted for corporate profit. This book spoke to me like the AI incorporated into Veil’s nervous system. Morgan has become one of my favorite authors. I admire his skill as a wordsmith and his imagination. He has given me another high bar to reach for in my own prose. It has inspired me to redouble my efforts to finish the current project and to increase my word count. Go and get this book now! It is published in the US by Del Rey. Here it is on amazon: Thin Air